The first day of Fall was last week, and I have to say that I’m ready for the new season. I love the crispy air, leaves on the ground, and of course pulling out all of my sweaters and jeans (yay!). To celebrate the start of Fall, I’m sharing some of my recent Picks from Pinterest.

September has just flown by–so quick that I haven’t even had time to share my monthly “Currently I’m..” post! Since it’s almost October, I’m sharing this month’s series for both September and October. This week was the first week of fall, and I’m excited to welcome in my second-favorite season of the year. Hope you’re having a great weekend! 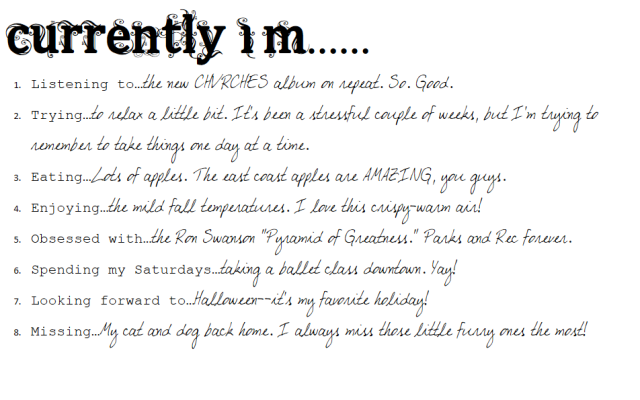 This post has been something I’ve wanted to write for a while now, but have been kind of afraid to. It’s kind of a long story and I won’t bore you with all of the details, but I’ve dealt with several disappointments and some major drama concerning my full-time clinical rotations (for occupational therapy) for the spring. When I thought everything was finally settled, I announced the news on my Facebook page, only for everything to fall apart a few days later. I was pretty heartbroken and frustrated, but as of now I have my placements for the spring, and I’m just crossing my fingers that nothing bad happens with them! Anyway. 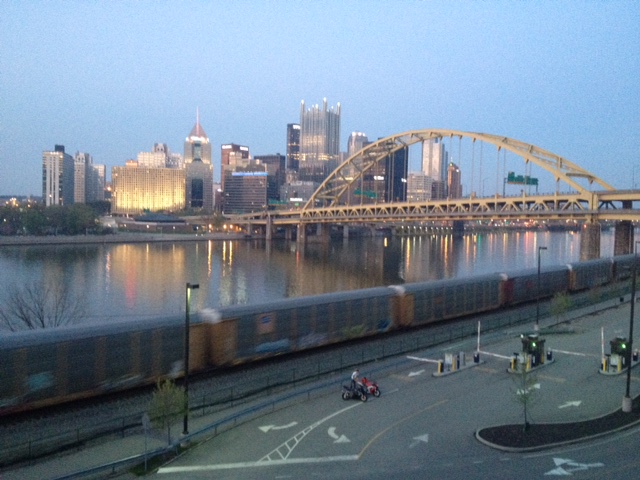 I’m excited to share with all of you that come December, I’m saying “goodbye” to Pittsburgh and moving…twice in the spring. That’s right. Two placements, two states, six months. It’ll be interesting to say the least! I don’t want to jinx things too much, so I’m not going to share where I’m going. As it gets a little closer, I promise I will keep you updated.

Looking up at the Cathedral of Learning.

As happy as I am to not have to spend January-March in Pittsburgh (the COLDEST winter season ever, am I right?), I’m a little bit sad to leave! I’ve made so many amazing friends here, and it’ll be really hard not to spend 8 hours a day with them, 5 days a week. Plus, there are so many things I love about Pittsburgh. It’s a great city, and it will always have a special place in my heart. I have a few things I still want to see/do before I leave, and I’ll share that “to-do” list in the near future.

For now, I’m just going to enjoy the beautiful fall season here in the ‘Burgh and relish these last few months.

Thanks for letting me share my news (and ramblings) with you!

One of my favorite things to do in Pittsburgh is spend a quiet morning in Phipps Conservatory, an amazing botanical garden/greenhouse/escape from an urban landscape. It’s especially amazing in the winter, since it’s pretty warm and snuggly inside, and the lively plants really cure the winter blues!

A couple of weeks ago I decided to spend my morning at Phipps–it is my happy place, after all–and snapped a few photos that I’m sharing here on the blog today. 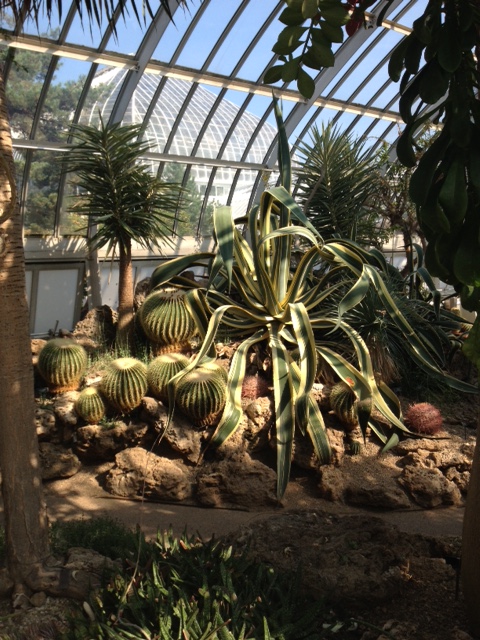 Of all the amazing rooms, the Desert Room is definitely my favorite. It may not be filled with ornate flowers, but those little cactus’ are poky and I love them. Everything about them is fascinating!

If you’re ever in Pittsburgh, make sure you check out Phipps! It’s a beautiful building filled with unique plants and flowers, plus they rotate the displays seasonally so the rooms are changing constantly.

One last photo of my morning–walking back from Phipps, I looked over the bridge and the view was gorgeous. This picture doesn’t do it justice (my iPhone camera isn’t working as well these days), but the lush trees with the Cathedral in the background…oh man. Pittsburgh is such a beautiful, old city. I’m really trying to appreciate everything about it before my time here is over.

Although it’s still hot and humid here in Pittsburgh (it’s been 90 degrees all weekend long!), fall is on its way with cooler temps and the best fashion of the year. I’m ready for my favorite things about fall–sipping hot coffee in the cool mornings, all things pumpkin-flavored, and going slightly out of my way to step on all the crunchy leaves on the sidewalk. And of course, fall is my favorite season of fashion. There’s just something inspiring about the fall.

Anyway, here’s some photos I’m looking at for inspiration as the fall sneaks up on us.

What fall fashion ideas have caught your eye? Happy September!